Roll Your Own, Save Your Home

I have recorded an improv version but not written this song down yet. Rolling your own cigarettes instead of buying boxed and filtered cigarettes is the message. Contact me if you would like to help me finish this song, or sponsor it!

What's that? You just saw a cigarette butt sail from a car window? Lodged in a sidewalk crack? Chances are you're not alone; cigarette butts are far and away the most littered item in the world, with roughly 4.5 trillion being tossed each year. The lobbying group American for Nonsmokers' Rights (ANR) reported that 1.69 billion pounds of butts ended up as toxic waste last year. That's like the weight of 177,895 endangered African elephants, or 555,555 Toyota Prius automobiles, or. . . well, you get the idea. That's a lot of junk in our collective trunk.

But cigarette butts aren't just a punch line for bad puns — they present a serious hazard to our natural world.

The butt itself is comprised of two parts: A plastic filter and the remnants of the used tobacco. While the leftover tobacco is by definition biodegradable, the filters are made from a plastic called cellulose acetate, a compound that eventually breaks down but never disappears. Ever. Combine that with the roughly 4,000 chemicals found in cigarettes, and you've got the recipe for a pretty awful eco-aftertaste.

This doesn't stop our wildlife from sampling the local cuisine. Birds and dogs often pick at the bite-sized waste, and marine animals like fish can ingest cigarette butts that wash into nearby lakes, rivers, and oceans. If the poisons don't claim their lives first, a predator or a commercial fishery might, setting into motion a complexly destructive cycle in our food chain.
~~~~~~ 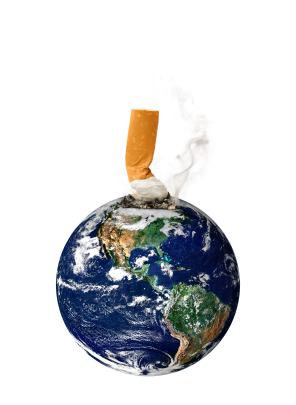 Via The Sierra Club:
The Most Littered Object in the World?

One thought on “Roll Your Own, Save Your Home [cigarette singalong]”