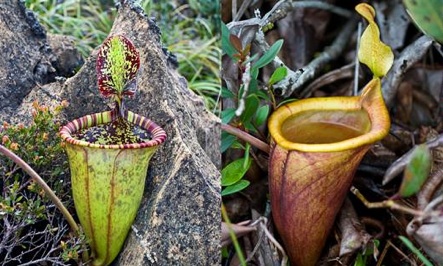 for my strange friends of the sea
I help keep the waters rad
by reducing, reusing and recycling
so they live it up deep in the scene

for my strange friends on the land

notes:
then when I look into their eyes
I know they know I'm on their side
my strange friends like me bly
cuz I'm their strange friend too

A co-writer(s) and an artist are needed to help write the Strange Friends Like Me song I have started and create the art or video for the song. Co-writers and artists might share the copyright with me and will be entered in Eco Lotto too.

A bug-eating sea slug? A fanged minnow? A carnivorous sponge? It’s not a carnival sideshow, but a selection of characters from the top ten new species culled from the thousands of species described and published in 2009. Each year in late May the International Institute for Species Exploration (IISE) at Arizona State University, in conjunction with an international committee of taxonomists, announce a list of their favorite Top 10 New Species for the preceding calendar year. It’s heartening to know that as some of our favorite animals are landing on the threatened species list and others are facing more imminent peril, there is a constant crop of new, albeit sometimes bizarre, species being discovered.

The top 10 new species come from around the world, including Africa, Indonesia, Madagascar, Myanmar, New Zealand, the Philippines, Thailand, the United States and Uruguay.

The psychedelic frogfish was first described in 2009 by Ted Pietsch, Rachel Arnold, and David Hall in the scientific journal Copeia–this camouflaging cutie has been known to reach a length of 15 cm (5.9 in). It earned its spot in the Top Ten because of its unique psychedelic pattern and its difference from other frogfishes in that it is flat-faced. They can be found in Indonesia.

Etymology: “The specific epithet psychedelica, alludes to the unique pigment pattern of swirling concentric rings and stripes that everywhere cover the head, body, and fins.”

Carnivorous plants, how ironic is that? Most plants absorb nitrogen from the soil through their roots, but carnivorous plants absorb nitrogen from their animal prey through leaves that have been specially modified as traps. Pitcher plants trap insects in folded leaves that create deep, slippery pools filled with digestive enzymes. Nepenthes attenboroughii is special because it is one of the largest pitchers, almost the size of an American football. Endemic to the island of Palawan, Philippines, it has only been found in one location–and such has been suggested for Red Listing as Critically Endangered.

Etymology: “The specific epithet, attenboroughii, is a commemorative, genitive noun in apposition taken from the patronym Attenborough. We have chosen to name this species after broadcaster and naturalist, Sir David Attenborough, whose outstanding television documentaries have made the world’s natural history accessible and understandable to millions. As a keen enthusiast of the genus and a patron of Philippine conservation efforts, it is fitting that this spectacular new species be dedicated to him on the occasion of his 80th birthday.” 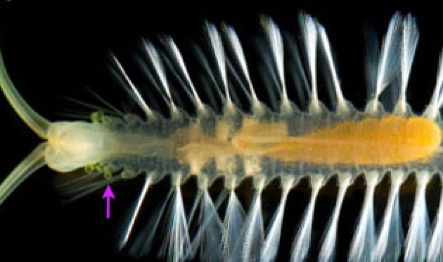 This feathery little sea worm deploys bombs? Well, I maintain it’s a bit of a misnomer. Green Bombers, found off the coast of central California, have modified gills that can be cast off from their body. These “bombs” illuminate for several seconds with green bioluminescence. It is presumed to be a defensive mechanism–I can’t think it would be very intimidating, but probably great for distraction as defense.

Etymology: Genus: “Named for members ability to swim. The name is treated as an arbitrary combination of letters and is designated as feminine by the addition of the Latin singular, first declension, nominative ending -a.” Specific epithet: “Named for the common name used for the group, green bombers. Bombus is the Latin root meaning humming or buzzing from which the English word bomb is derived. Viridis is Latin for green.”

Photo: Casey Dunn (The purple arrow points to the several bioluminescent bombs still attached to the segments immediately behind the head.)

Dioscorea orangeana is a new species of edible yam found in Madagascar. Its shape is unique among Malagasy yams because it has several finger-like lobes instead of just one. Although newly described, the authors suggest that it should be Red Listed as Critically Endangered since it’s heavily harvested and growing in unprotected habitat.

Etymology: “The vernacular name Angona is also applied to Dioscorea sambiranensis R. Knuth amongst other species. Thus the epithet orangeana was chosen to reflect the endemic distribution of the species in the Forêt d’Orangea.”

Seriously? This cute-as-a-bug slug actually eats insects? Yep. The discovery of this amphibious and insectivorous sea slug in Thailand has resulted in a new family, Aitengidae. Although it shares nearly all characteristics with sacoglossans, nearly all other sacoglossans eat algae and a few specialize in gastropod eggs. This slug is so cute, maybe it will be the next teacup pig.

Etymology: “The name is derived from Ai Theng, which is the name of one of the popular puppets in shadow plays (wayang) in the southern part of Thailand. It is a jolly, smooth, black, male, who plays in the night. Statues and drawings of various famous puppets were seen along the roads in the area during our visits. The smooth Ai Theng with his large lateral eyes did remind us of the just discovered slug. The specific name is according the colour that looks black on the mud of its habitat.”

This big web-weaving, hunky spider from Madagascar is the first species of Nephila to be described since 1879–it is the largest Nephila to date. Nephila has the distinction of spinning the largest webs known, often greater than 1 meter in diameter. Although the web of this new species has not been observed, it is assumed to be massive. 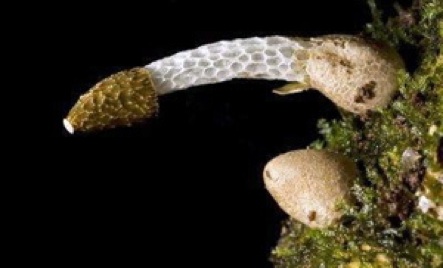 Well perhaps it’s good this one doesn’t have an official common name, this is a family website after all. The two-inch mushroom was named in honor of Dr. Robert Drewes and was the subject of the June 20, 2009 segment, “Bluff the Listener,” on the NPR quiz Show, “Wait, Wait Don’t Tell Me.” It’s a notorious mushroom, and I think I can guess why.

Etymology: “Named (with permission) in honor of Dr Robert C. Drewes (California Academy of Sciences) who initiated extensive multi-organism biodiversity studies on the islands of São Tomé and Príncipe and who has dedicated more than 30 years of his life to research in Africa.” 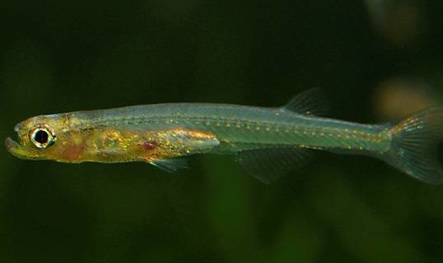 Males of this species, found in Myanmar, have canine-like fangs for sparring with other males. Sparring little minnows, it’s hard to picture. This is the first record of oral teeth-like structures being found in the Cyprinidae, the largest family of freshwater fishes.

Etymology: “The species name dracula alludes to the long tooth-like fangs in the jaws in males of the new species and was inspired by Count Dracula in Bram Stoker’s novel.”

Gymnotus omarorum, was misidentified as G. carapo for 30 years while used as a laboratory model organism for research on electric organs and electrocommunication by neurophysiologists in Uruguay. This and other species (until recently) have been grouped into G. carapo. So after 30 years of misunderstanding, the Omars’ is finally getting its recognition. Now if only they’d leave it in the water instead of using it in the lab.

Etymology: “Species named to honor Omar Macadar and Omar Trujillo-Cenoz, both pioneers in the anatomical and physiological study of electrogenesis in Gymnotus.” 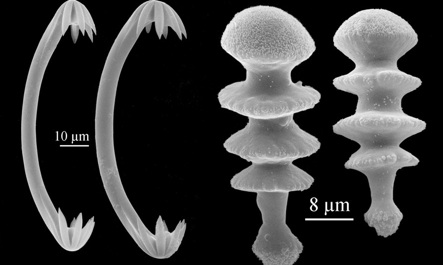